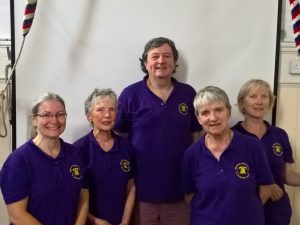 It was a hot sticky evening on Thursday and six ringers from East Molesey came to Christ Church Isle of Dogs to join our local band practice and also enter our challenge striking competition. They turned up on time, all smartly dressed in matching T-shirts and although apprehensive about their abilities, they were keen to have a go and find out what they could do to improve their striking.

Isle of Dogs lies at the corner of four different ringing associations (Middlesex, Essex, Kent and Surrey) and does not, therefore, have the same benefits as towers located more centrally. We set up the competition to encourage ringers from towers in the four local Districts to come to our practices and help develop our local band.

We have a simulator, connected to all of the bells, so we can record two touches of 120 changes (even if only call changes) in Abel and the file can be marked by the 12 bell competition striking analysis software (CAS). The competition is now in its third year and teams have until 21 December to come and enter for the prize of a magnificent cup and a bottle of champagne. As the judge is a computer, it is 100% consistent each time it is used, and produces a percentage score which enables easy comparison.

East Molesey are the first team to come this year and we look forward to welcoming further teams over the next six months. We were able to play back the ringing to the East Mosley team and, using the graphics on screen, explain some simple things that they could practice in order to improve their striking. We were also able to examine the accuracy statistics for each ringer, and send them a printout afterwards.

The East Molesey team are probably typical of the majority of Sunday service bands, and having seen the benefits are now considering installing a simulator in their own tower on at least one of the bells. Although currently near the bottom of our league table, they left confident that with practice they could move up the league table significantly when they return next year.