It all began with an email from Lucy to Graham stating her enthusiasm to do more ringing and in particular ring some spliced surprise major. So, on 28th August 2008, John Gwynne, Lucy Gwynne, Sue Marshall and Graham Nabb rang their first quarter peal together. It was Cambridge, Beverley and Surfleet at Keresley. Since then, the four of us plus Becki Johnson who joined us in 2010, formed a reliable and supportive band who met most Thursdays to ring a quarter peal with a “learner” .

A chance comment recently – “We must have rung quite a few together” – set off some research which showed we were coming up to a significant number….and on 6th February 2016, we rang our 300th quarter peal together. The majority of our quarters have not been spliced surprise major or indeed major at all. Most have been on 6 and many arranged as first quarter peals (36) or to encourage local ringers to achieve personal goals; first inside or first in the method for example (122).  Several have been for Christmas, Easter, Harvest etc at churches in Warwickshire with few or no ringers.

Hopefully Lucy has not been disappointed by the lack of spliced surprise major but has achieved satisfaction in ringing well on some of the more difficult bells in the area as well as helping others to progress. 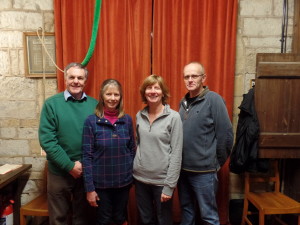