After an extensive three page recruitment cover in The Western Daily Press and  advertising in our local Towers, we were delighted to enrol several young ringers (10 and 12 yrs old). They all bonded well and our Young ringers group (calling themselves The Edingers), started at Edington Ringing Centre  in Wiltshire during the Easter Holidays of 2010, with eight youngsters from The Devizes area, plus another two joining us in the summer – one designed our very own Edingers badge with Mum ordering us t-shirts etc..  Our objective has always been to teach them to ring and strike a bell well and have fun.

Our very first outing consisted of a walk along the Kennett and Avon Canal, ringing at two towers on the way. During the picnic lunch break, handbells were rung much to the interest of passers-by. We ended the day with ringing on the ten at Edington (first time all ten bells had been rung by our group), followed by a barbeque.

During 2012, six more youngsters came on board and with lots of help from many Devizes Branch ringers, some of the more advanced started to learn change ringing. On 23rd April we rang at all three Towers in the benefice for St George’s Day, ringing Queens, Titums and Plain Hunt and on May 22nd joined others to ring for The Olympic Torch at Christ Church, Bradford on Avon. On 28th May 2012 Adam Hiscocks age 14 yrs rang his first peal of 5040 Plain Bob Doubles for the Diamond Jubilee of HRH Queen Elizabeth 2nd.

On the opening day of The Olympic Games (27th July 2012), after ringing early in our local towers, 11 young ringers and supporters, travelled by train to London and following a boat trip down the river, rang at St Olave’s Hart Street and St Clement Danes to celebrate this momentous event.   In September of 2012 Frank Seabright came to deliver our first insight to ITTS  which eventually resulted in five teachers gaining their Module 1 teaching certificate and giving us a great boost at Edington and to the Devizes Branch in general.

Another adult Edinger (Mother of one of the youngsters) rang her first quarter peal in October.  During Easter 2014, we had another recruitment drive and featured in the “Wiltshire Life Magazine” five new beginners started to learn, four of whom are still members. Seven young ringers attended the Ringing World Road Show, we made this our Summer Outing by ringing at a Tower on the way and on the return journey. We celebrated four “firsts” during Guild quarter peal week in November, before our Christmas Ringing for two Carol Services.

Ice Skating was chosen as our Christmas Celebration. January 2015 saw the dedication of the new Saxilby Simulator (with support from The Ringing Foundation and the local Area Board), making it possible to teach without interrupting our Beginners’ practices.  Our new Training Officer Laura, instigated new bell handling sessions on Monday evenings, resulting in five new youngsters being taught to handle a bell. We also entered the Branch Striking Competition where we came 5th.

Practices continue on a weekly basis, sometimes changed to Mondays, as several of our more experienced youngsters found they now had other commitments on Wednesdays. In August two ART members ran a Beginners’ Course and Victor (a student on holiday from Spain), fulfilled his ambition to learn to ring on English Tower Bells and joined with our youngsters for one extra practice.  We have 8  youngsters at present on the “Learning the Ropes” programme and one from Devizes, who has now finished the scheme but sadly has stopped ringing at present, as he is hoping to get into London University after his A levels next year.

We have managed to keep this group going for well over five years now, losing some and gaining more, three of our original ten are still with us, which is very pleasing as our aim was to try and attract young ringers and keep them ringing.   One of the things that has contributed to this, is the fact that although we do enrol our youngsters now for the “Learning the Ropes” scheme, (It was not available in 2010) we do not push them.

Four of the young ringers have rung quarter peals and one a peal. One has taken the ITTS Module 1 to become a teacher and will be teaching a learner very soon. It became quite apparent, very early on, when I sent out some ringing homework for them to do – the reply came back during our next practice “We get enough homework from school and we don’t need it from ringing” – I was delighted in a way that they saw ringing as a leisure activity and as fun. 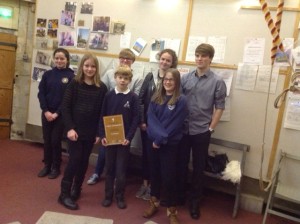 I have been so lucky with the support and encouragement of parents and members of The Devizes Branch of the Salisbury Diocesan Guild of Ringers, especially my friend and fellow ringer Patsy Thorn. I have always kept a register of our events and practises and could not have written this application in such detail if this had not been available.  It has been a great experience in later life, to have this opportunity to join in the teaching,  ringing and fellowship of this group of young people.

3 thoughts on “Plenty to Celebrate for the ‘Edingers’”