On 23rd and 24th  June something very special happened at Lincoln Cathedral – a Heritage Skills Festival was held in conjunction with the City of London Livery Companies. 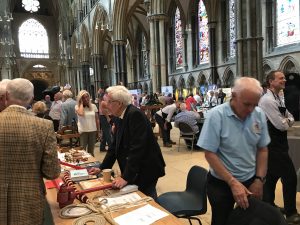 General view inside the Cathedral

The event arranged by the Cathedral and was the largest skills festival of its type to be held outside of London. The number of displays were too numerous to mention all, but included embroidery, glove–making, clock making, saddlery, flower arranging, stained glass, calligraphy, stonemasonry, wood turning, lead plumbing,  and of course, bellringing….

The aim of the event was to showcase the historic crafts that went into the construction of the Cathedral; and those that support and enhance its daily life. Most importantly, the event demonstrated how all of those skills are kept alive today. 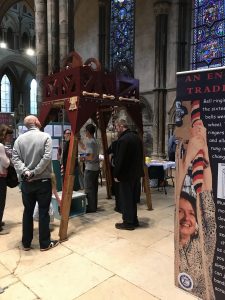 There were numerous displays, demonstrations, and hands-on have-a- go areas, with something for all ages.

Phil and Dot Mason’s Woodside Campanile was set up in the Cathedral for the event and visitor numbers surpassed all expectations. A team of 15 ringers were on hand throughout the two days to teach youngsters and adults to ring – which is easy on a mini ring – most people being able to handle a bell within a couple of minutes. One young lady even managed to ring the treble to rounds within two minutes. The star of the event was our new Dean – the Very Reverend Christine Wilson who looked extremely comfortable on the end of a rope! We lost count of the number of people we taught to ring – and it’s great to report that as a result we have 5 new recruits. 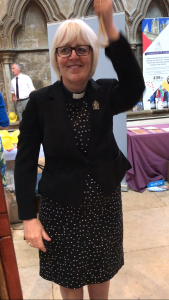 Two quarter peals were also rung on the Saturday despite the organist trying his hardest to compete with the campanile!

There were also a rope splicing demonstrations throughout the event by Alan Bird and we had plenty of bellringers to man the stand and chat to visitors. We also had clappers, bell ropes, a model bell plus various ringing materials on display.

This was a very “hands on” event where visitors were actively encouraged to have a go at as many of the skills as possible, under expert tuition and guidance. 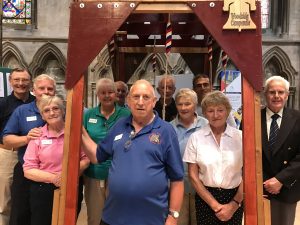 The weekend culminated in grand auction on the Saturday afternoon at which many of the items skilfully made during the weekend were auctioned off, with funds going to Lincoln Cathedral.