In 2013, a fellow ringer suggested we start a monthly practice at Broseley in Shropshire with a view to establishing a new band; there hadn’t been an active band there in several years.
I mentioned this to a friend, Teresa, who is also the landlady of a local pub (so I see her quite often!), and she asked if she could come along and have a go. Teresa brought along another friend, so we had a learner each to teach. The one-on- one tuition didn’t last long, though, as Teresa then brought along her daughter, and the friend brought along another friend. We were starting to establish a band, so changed to a weekly practice. 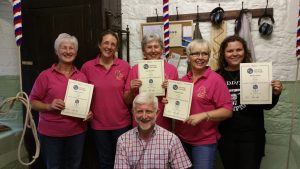 Things became more challenging when the other teacher was no longer able to assist, and I was left teaching an ever-increasing group of learners single-handedly. The learners were very supportive and gave me the motivation to carry on, although I thought it was going to be more work than fun.
Fortunately ringers from two local towers soon stepped in to help.
A few months later, I attended an ART Module 1 course with one of these helpers, Neil, as my
mentor. The Module 1 course was a huge help. It increased my confidence and gave me lots of new tools to help with my teaching. I found the log books useful for keeping track of the progress of my learners and ensuring I’d covered everything.
Now, four years on, my original four learners are all still ringing. We currently have a team of 8
ringers, plus 3 new learners. We don’t have as many helpers as we’d like, and it can take a long time for learners to master something new without having experienced ringers around them. I think the team has bonded more strongly than usual though from facing these challenges together, and ringers often get cheers or applause from the team when they accomplish something for the first time. 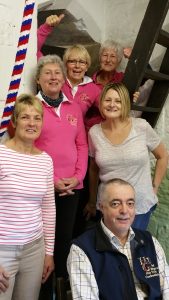 Our band consists mainly of ladies and this is evident to anyone visiting our tower; it is adorned with cushions and ornaments and we have no shortage of chocolate! I was outvoted on the team colour and we are hard to miss in our bright pink polo shirts.
We’ve had some turnover in the band due to ill health and other reasons, but don’t have any problems with recruitment. When new people move into the area, they often call in at the local puband a few drinks later find themselves press-ganged into bell ringing.
Our practices start at 6.30pm, as we are not allowed  to ring the bells after 8pm. The early finish does mean we have plenty of time to go for a drink or a meal afterwards. Curries are a firm favourite with our band and we are regular visitors to our local Indian restaurant. The supportive atmosphere, along with regular social events, helps keep ringers motivated. 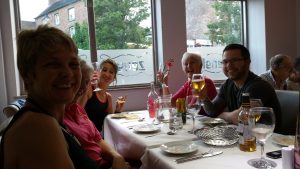 I recently obtained my Module 2F certificate and my original 4 learners now have their Level 2
certificates. I look forward to attending a Module 2C soon. The Learning the Ropes scheme is very popular with the band, as it gives them a sense of achievement and a means of measuring their progress.
Ginette Pardoe, Tower Captain, Broseley

One thought on “Starting a new band at Broseley”