In September 2015 after gaining my LtR Level 1,  I wrote a piece for the magazine entitled  “Why I nearly sacrificed bell ringing for the sake of my teacher”. So long did it take me to put the hand and back strokes together  and have some kind of a control over the bell, I decided I was wasting her time. That you are reading this now proves I am still going.

It took me a long time to pass Level 2. I had a few style issues including a floating right hand.

At the time I didn’t think it really mattered but now I understand how important it is to get those handling skills thoroughly ingrained.

At the risk of  sounding negative there have been many, many things I thought I would never be able to do. Standing the bell, ringing faster and slower, call changes, plain hunt, leading, they have all caused me restless if not sleepless nights. I remember the first time I was told to ring the treble I was delighted because I thought I could just do my own thing and everyone would have to follow me!

When I finally got that Level 2 certificate and was framing it ready to hang on the wall, (yes, really!) I thought, “Well that’s it, there will never be another one because I will never, ever be able to ring a Quarter Peal”.   But  I have, twice, treble and tenor, my Level 3 certificate is on its way! 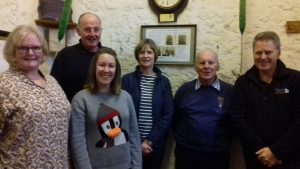 I’m not the fastest learner but I have had such a good time practising and going on outings and even a ringing holiday. I am still in awe of the amount of time experienced ringers are prepared to give to help people like me get a little better and would like to thank them all.

Obviously, I will never be able to ring a Quarter Pearl  inside!

P.S. from her teacher: ….. Little does she know that I am planning a quarter peal of Bob Doubles for Rosemary to ring inside after the Bradfield Ringing Course in August, where she has a place on the Bob Doubles course.  I am 100% confident she will be ready for it.  Rosemary is not sure there is life after Bradfield so watch this space for her next blog!