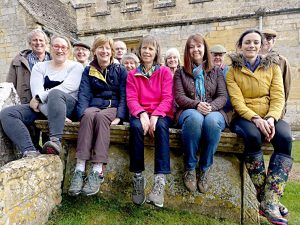 A special day out was arranged in the Cotswolds for ringers Graham Nabb (who loves steam railways) and his wife Sue Marshall (who loves to walk), with bell ringing friends and family being invited along to ring with them and enjoy the day together.We met on a beautiful April day at the gorgeous gate to the beautiful Stanway House. The church was right next to this ancient pile which has the tallest gravity-fed fountain in the world at over 300ft (91m). We couldn’t see this, but we have it on good authority it was worth seeing.The ringing room was cosy and looked fairly recently refurbished. The five bells were enjoyable to ring. As time went on, more of us appeared and we totalled 13 ringers in all. We had an additional member who did the sterling job of ticket buyer and driver, more of that to follow.It was a very short drive to the next church at Didbrook. Sue and her daughter, Rebecca, decided to walk to this church, but took a wrong turning. They still turned up in time to do some ringing, so all was well. This church had an unusual ringing area with advice on how to get the spider down and what to do once the spider was no longer needed. The spider served as a handbag- and coat-holder as the weight and the mechanism for lowering it wasn’t easy. An umbrella was hanging on the spider when we arrived and we wondered why. We soon found out as, when we tried to lower it, it wouldn’t budge and we needed the assistance of a tall ringer to grab the end of the umbrella to bring it down. A convenient coat-hook was used. The five bells in the church were at the entrance of the church and were anti-clockwise, with the treble, 2, 3 and 4 all in a straight row. The tenor was on the other side of the door, which gave the person ringing the tenor a great view of the other bells. 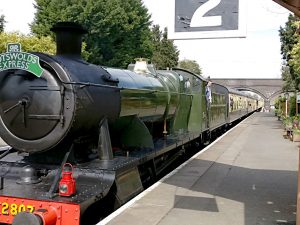 On to the highlight of the day. Mike McCarthy, who was our additional helper and husband of Kathy, went to the Gloucestershire Warwickshire Steam Railway centre, which was less than a mile away, and purchased train tickets for all of us for the steam train journey to Cheltenham racecourse and back to Broadway. Some of us took pride in the fact that they had blue tickets for the under 60’s where the rest of us had green tickets (OAP). We boarded our train with much excitement and started our slow journey to the race course station. Much chatter was heard and some even had a celebratory tipple of Pimms or pink fizz. We disembarked at Winchcombe where we had to wait for the next train. Sue, Rebecca, Lucy and John took this opportunity to fit in another walk in the interlude, arriving back only just in time for the departure. I’m sure those in the know will tell me what type of steam train we were on and also what type of diesel train we were on, but for the most, we just enjoyed the company. 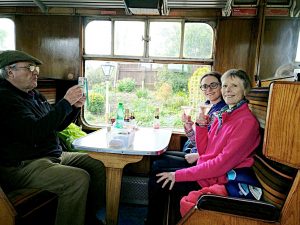 We were on our way again and stopped at Broadway which was the last stop on the line. Most disembarked and took the opportunity to walk to the next church which was about a mile from the station. The rest of us stayed on the train to return to Toddington to collect cars and then meet up with the rest of the band. We arrived at St Eadburgha to a locked church. While we waited around, we took the opportunity for a group photo

This article first appeared in the July 2019 edition of Tower Talk magazine, ART’s free quarterly e-magazine for new ringers, by new ringers. If you’d like to subscribe for future copies, please sign up here