Ellie Seddon was the 100th ringer to achieve ART Learning the Ropes Level 5. Speaking to Tower Talk magazine about what motivated her to take up ringing, Ellie says:

After returning from University I made a conscious effort to take up a new hobby, and after overhearing a conversation about a local village (Kirtlington) recruiting bell ringers, I decided to make the call and give it a go! Steve and the rest of the team were so welcoming, and incredibly generous with their time when I joined the tower. In spite of a few blisters on my first session, I soon caught the bell ringing bug! Having one-to-one tuition classes separately and prior to each weekly practice was hugely valuable whilst learning and helped to lessen the worries that I was ‘disturbing’ the weekly practice of the other ringers. I also liked that the teaching was well structured with clear levels of progress and regular, practical targets to aim for. 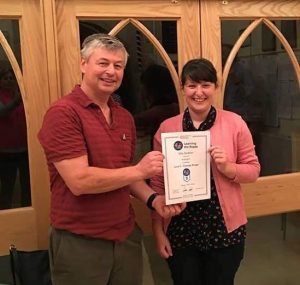 Ellie joined the Kirtlington team in November 2016 and was my second ringing recruit using the ART LtR scheme. From the outset, it was clear that Ellie was a quick and able learner, ringing Rounds unaided within four weeks, leading and covering tenor in eight weeks. After three months Ellie was able to Plain Hunt and two months later she attended the Oxford Diocesan Guild Radley Course, where she trebled to a touch of Plain Bob Doubles for the first time. Nine months in, Ellie attended the residential course at Bradfield College, which provided excellent training in Plain Bob Doubles; shortly afterwards she rang her first quarter peal inside to Plain Bob Doubles. In less than eighteen months Ellie had mastered Plain Bob Minor, helped by another Guild course, ringing a number of Minor quarter peals. Despite having busy work and personal commitments, Ellie studied and mastered Grandsire Doubles during summer 2018 and rang inside to a quarter peal of Grandsire Doubles this September, which completed her ART LtR Level 5 practical targets. To date, Ellie has rung nearly twenty quarter peals, including Plain Bob and Grandsire methods, is a vital member of the band, and is in much demand for her excellent striking.The Kirtlington team has recently been re-formed after several years and none of this would have been possible without the support of other towers within Bicester and neighbouring Branches. Special mention should be made to Alison Merryweather-Clarke from Witney and Woodstock Branch, not only for being my ART Mentor through Modules 1 to 2C, but also organising and conducting many quarter peal attempts for Ellie and others in the team to achieve their ART LtR and general ringing objectives 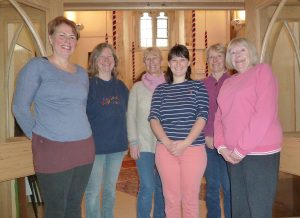 Ellie in a Ladies’ QP band, celebrating the centenary of women’s suffrage

My favourite thing about bell ringing is the extended family which you’re introduced to; not just in your immediate tower, but in all the surrounding parishes and beyond! Despite living outside Kirtlington, I have been welcomed to the village as if we had all been neighbours for years. As well as looking forward to our fun regular practices, ringers take part in village quiz nights, village fêtes and Christmas parties (with our“relaxed” hand bell ringing). I also appreciate the opportunity to see so many beautiful towers, each of which has a unique piece of history, such that I now find that I’m on the lookout for bells regardless of which county (or country!) I’m in.I have just signed up to Learning the Ropes Plus, and have recently completed trebling to my first triples quarter peal. My next short-term goal is to ring inside to a Triples method quarter peal, and longer-term to conduct a Doubles method. Although it feels like an ambitious challenge now, I think it’s always great to have something to work towards. Also, whilst I can’t say I’m a huge fan of bats or spiders, I would love to learn more about the art of steeple keeping. 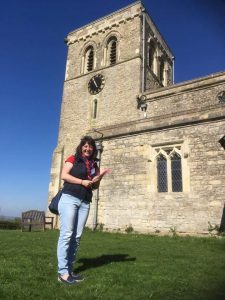 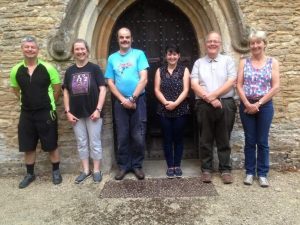