It all started after having a go on a mini-ring at an open day at Lincoln Cathedral, when my daughter and I were invited to try a ‘real’ bell. I started to back-pedal – busy lives, teenage kids, working shifts – however,Sandra Underwood, who became our teacher, was not to be deterred. (With a name like Bell, it seemed like our destiny!) I asked my son Alex if he wanted to come too and, despite not being keen, I persuaded him by saying that he had nothing to lose. If he did not like it then he never had to go again, but there was a chance of gaining a new and unusual hobby that might make the difference between his CV getting put on the interview pile rather than in the bin. As it happens, Alex is the one that has made the most progress! He was invited to join the Cathedral Company of ringers in January this year and ringing has helped increase his confidence socially. So we started with teachers Colin and Sandra who even changed the learners’ practice nights to accommodate my shifts, allowing a weekly practice. We had not been ringing long before we were given a challenge – to be able to handle a bell well enough to ring Rounds at Lincoln Cathedral (a mile from our house) for New Year 2017/18 and we went for our first practice up there in November.

Well … come New Year the kids managed well and my Rounds were more ‘star-shaped’! Being able to go outside onto the roof and trade waves with the crowds was brilliant. All three of us continued to go to the Cathedral and other practices, although I found the Cathedral brought on an anxiety I had not felt before. 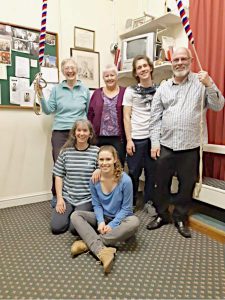 However, I kept at it, otherwise the children may have stopped going. Alex and Mandie learned more quickly that I did but they waited for me to get good enough to ring our first quarter peal together, nine bells ringing in a6-bell tower (see photo). Alex then advanced with speed but Mandie felt under pressure to keep up with him, so she decided to wait for me and we will advance together at a more sedate pace after consolidating skills at Learning the Ropes Level 3, as educational commitments have had to take precedence. Alex worked his way around the bells at the Cathedral earning the chance to ring the tenor, which he did whilst still 14. He has had a busy year and has completed Level 5, Gold Plus on 50 Ringing Things and two peals. He is soon to be assessed as an ART teacher. Both of them have had the experience of competing in the Ringing World National Youth Competition in London and Liverpool. Alex will be taking GCSEs next year so it will be his turn to put educational commitments first for awhile. We all have different qualities and ways of learning and remembering. Mandie is naturally more sociable and has organised a ringers’ bowling evening for local towers. Ringing has brought new friends, experiences and given us a common theme to help keep the family together. We are well supported in our ringing ventures by husband/Dad Steve, who is unfortunately unable to ring or climb most towers but he will help with logistics and join us at accessible towers for branch practices and social events.