Plain Bob Doubles is usually one of the first methods that you learn after you have mastered Plain Hunt. The treble plain hunts up to 5th place and back and there are four working bells which complete a cycle of work.

The four working bells Plain Hunt until the treble leads.

When the treble leads, one bell makes seconds [strikes two blows in seconds place] which causes the bells in 3-4 to dodge and the bell in 5th place to ring 4 blows in 5th place [long fifths].

The bells then continue to hunt until the treble leads again.

Rules for passing the treble

When learning a method it is a helpful reminder to know where you pass the treble. If you forget what work comes next, passing the treble in a certain known position can be used to remind yourself of what to do! In Bob Doubles it goes like this:

There is a lot of jargon associated with ringing methods. If you are unsure have a look at our jargon buster or use the search box to find an explanation.

Cycle of work or blue line 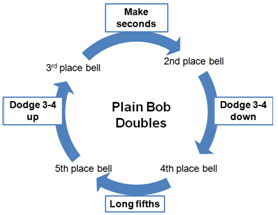 All bells ring the same work in the same order eventually coming back to their own starting position. This can be represented by a blue line or a cycle of work.

Try and remember the cycle of work. If you are lost and are told to make long fifths then you know that your next work is going to be dodging 3-4 up.

Watch Plain Bob Doubles being rung.  Select a bell and watch it go through the cycle of work. (*)

Touches alter the order of the bells using bobs or singles. In Bob Doubles bobs are used and as with other methods a bob has the effect of changing the pathways of three bells. The remaining bell is unaffected.

When is the bob called?

What do you do when a bob is called?

The bell which was going to dodge 3-4 up rings two blows in 4th place [makes the bob] and becomes 4th place bell.

The bell which was going to dodge 3-4 down runs in and becomes 2nd place bell.

The bell which was about to make seconds runs out and becomes 3rd place bell.

What do you do the following lead?

Print off Plain Bob Doubles cribsheets for use in the tower