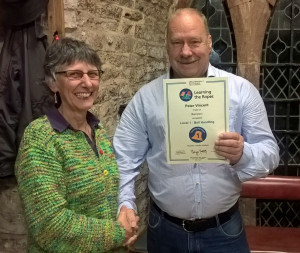 He is pictured with Jeannie Byham, also achieving level 1 at the same time and
Mandy Burnett, awarded Level 3 in October, at their practice tower in Bampton,
Devon.  Mandy also gained the Guild of Devonshire Ringers Guild certificate for
ringing 120 changes on the treble. 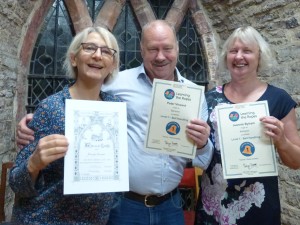 Peter and Jeannie both began ringing in March 2015.  Using the practice bell, linked to a simulator in Bampton tower with weekly sessions and more when possible.  They both gained ability & confidence to join the band for general practices the end of April, sharing a rope with a teacher to ring rounds on open bells. With a heavy work commitment, practices were intermittent during the summer but once into Autumn Peter and Jeannie regularly managed teaching sessions on the practice bell, followed by open ringing with the rest of the band and some visits to Tiverton, St Peter’s learners & open practices.

They are both now ringing for services and gaining skills (and ticks in the LtR record books) towards Level 2!