I had been attending simulator sessions at a nearby Church since starting to ring again in 2013. These were run by (the late) Peter Wenham at Braunston. When I started to teach others myself in 2015 I could see the possibilities but hadn’t access to the £500-600 plus computer and software that a simulator set-up would have cost to purchase at the time so it went on the back burner.
Last August I was looking around on the internet and up popped a new site I hadn’t spotted before, The Liverpool Ringing Simulator Project. I was immediately impressed. The project was based on the principles of open-source meaning that all the technical details (program for microcontroller and even PCB layouts and circuit diagrams) were, freely available for anyone to use. The thing that made this stand out from similar things I’ve seen in the past though, was the attention to detail and the exemplary documentation of the project. This gave me the confidence to contemplate making a version for Crick.
I contacted the project leader Andrew Instone-Cowie and was pleasantly surprised to receive a very supportive email and an offer of help should I hit any problems. I had a couple of weeks which were fairly free and to get me started while my PCBs were being manufactured in America he sent me some spares he had lying around. I hit a few snags but always had support from Andrew and had something working within a few weeks. 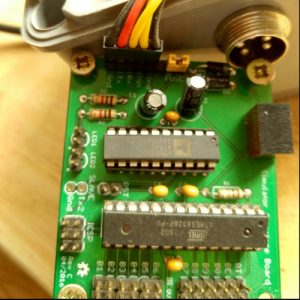 I still needed to build sensors sort out cabling and get things in boxes, as I had a bare circuit board at this stage 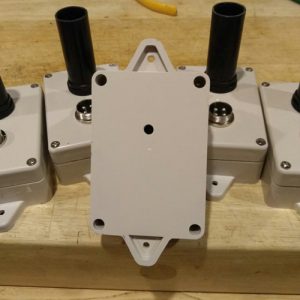 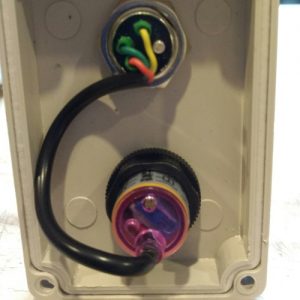 Muffles for the bells also needed to be made. Eventually near to Christmas I assembled everything in the tower connected the computer and a few bells sort of worked. After some grumbling I pulled the wiring out took all the sensors off of the frame and took them home for proper bench testing all assembled correctly. I had made 2 soldering errors on two of the sensors. All was tested and at the second attempt almost all worked, but not quite. The sensors were a bit too sensitive, so I bit the bullet taking all six out and remounting them so they would be further from the wheels. Now it all works! Fabulous. 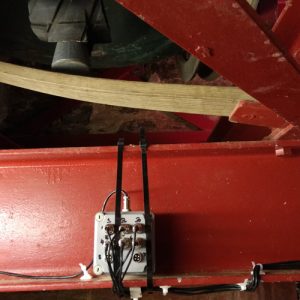 A bit of a journey. Not trivial but not impossible either. I think the total cost was under £200 (old laptop, software, old amplifier and speakers not included) but I have sufficient spares to make most of another 1-2 simulators and some of this cost was tooling.

Our first fully simulated practice will be this coming Saturday morning.