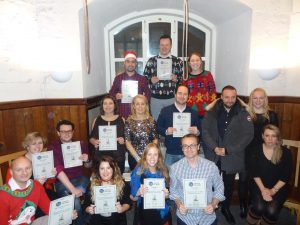 A few months ago we received an enquiry from Stanford Resourcing, a City of London based financial services-focused recruitment consultancy, whose employees wished to try something different, before their Christmas meal in crypt of St Mary Le Bow in Cheapside.

It was with some trepidation that we agreed to try and organise a taster session for them. We were not sure if we could find sufficient ringers with the right skills on a weekday afternoon, or how much to charge Stanford. In the end we decided to pay the ringers twice the going rate for a wedding (the time involved was roughly double) and the tower the usual 3 hour peal fee. We also included a donation to ART, which will be used to support future recruitment and training activities. Stanford readily agreed to this.

In the end, we had more than enough people willing to help, and needed to turn a few late comers down. At 3.00pm on Wednesday 13th December, ten ringers, including three members of ART and other experienced teachers from Middlesex, London, Surrey and Kent, and the SRCY’s Alan Regin met at Magnus the Martyr in the City of London for a pre-briefing. At 3.30pm seventeen members of Stanford’s staff ascended the tower to meet the ringers.

After introductions, we gave a safety briefing and then demonstrated rounds being rung on the back ten bells. There is a floor above the bells, with a good view down through a metal grating. Once everyone had ascended to this level we were able to explain the action of a bell, as the tenor was turned over a few times, and answer questions.

Back in the ringing room, after a demonstration, most of the staff then had a five-minute introductory handling lesson, ringing backstrokes with an instructor. There was sufficient space in the ringing room to be able to give four people a go at a time. Whilst this was happening those waiting their turn were able to talk to the other ringers and also try ringing some rounds on handbells. We also gave everyone a copy of ART’s Discover Bell Ringing book to read, and to take away as a momento.

Alan Regin then spent a little time explaining history of change ringing, of which St Magnus had played its part over the last 300 years. Alan also brought along the World War I Rolls of Honour for everyone to see, and which he had spent a considerable amount of time researching in recent years.

Alan also explained the different reasons why people ring bells and pointed out Rod Bickerton, one of the teachers present, who admitted to having grabbed over 6,500 towers. When questioned, Alan admitted that he had rung 5,681 peals, describing himself as almost a professional ringer!

It all works out well

All the Stanford staff had picked up ringing the backstroke very quickly, so next we rang rounds on the middle six bells, with two of the Stanford staff in at a time, ringing the backstrokes for 3 to 4 minutes under the guidance of an instructor. As each pair completed this, they were presented with a special certificate to mark the occasion, and applause from their colleagues.

The afternoon concluded with an explanation and demonstration of call changes, followed by a bob course of Grandsire Caters. This went faultlessly – unlike our practice touch earlier in the afternoon, before the Stanford staff arrived!

Everyone thoroughly enjoyed themselves, ringers and non-ringers alike, and at least two of the Stanford staff were interested in going to their local tower to take up ringing. However this was not our primary object, as our aim was simply to raise awareness of ringing, and show people something which they might never otherwise experience.