I am the Tower Captain at Broseley in Shropshire, where we have a band of ringers I’ve recruited and taught over the last 6 years.

One of our ringers, Jan, recently told me about the plight of a local four year old boy from Broseley, Zac Oliver, who has a rare form of leukaemia. Zac’s family want to raise £500,000 to send him to the USA for treatment. Various organisations have rallied to Zac’s cause, holding ‘wear red for Zac’ days and other events.

Jan suggested that we could do something to raise money for Zac, and I suggested a quarter peal.

Due to the short timescale I decided that we would ring Plain Bob Minimus so that we would have a chance of succeeding without outside help. The band would consist of our three most advanced learners, Jan, Gaynor and Darren, who all opted to ring inside bells, with myself and another experienced ringer on the treble and tenor. 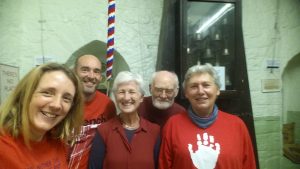 Two of our ringers, Jan and Gaynor, had never rung a quarterpeal before, and were not sure they’d be able to concentrate or physically ring a bell for that long. We devoted the first part of our next practice to a trial run with our chosen quarterpeal band. The attempt lasted around 20 minutes before it went irretrievably wrong!  Undeterred, we distributed sponsorship forms and started raising money.

The following week, we met up on a Wednesday night for our quarterpeal attempt, all wearing red for Zac. John, the tower captain at nearby Coalbrookdale and one of our regular helpers, rang the treble. With three learners on the inside bells, mistakes were inevitable, but our ringers did remarkably well. We had one dicey moment halfway through, but we managed to salvage it, and the quarterpeal then carried on uneventfully through to completion.

Here are Jan’s feelings on ringing her first quarterpeal: “I wanted to do something for Zac and, as I’d never done a quarterpeal before, it seemed like a good idea which would also raise a positive profile of the bellringers. In a week we managed to raise over a £1000 in sponsorship; that was the easy bit! Ringing the quarterpeal was certainly the scariest thing I’ve done for a long time. The responsibility of getting it right and not letting the team or Zac down was enormous. But we did it and lots of people in the town are talking about us which is an added bonus.”

Gaynor’s opinion: “Our Tower Captain had been saying for some time that we should try a quarter peal. Somehow it was never the right time and then Jan suggested we raise some money for Zac and all of a sudden within a week we were doing a quarterpeal! The fact that we were being sponsored made it even more important that I didn’t let the team down. The experience has given me more confidence in the fact that I can actually ring for 45 mins!!”

We put ourselves under a lot of pressure, as the quarterpeal attempt had been publicised and we had over £1000 riding on it, but we succeeded against the odds. Jan and Gaynor rang their first quarterpeal, and Darren, who has only been ringing for 10 months, rang his first quarter inside. This was a huge achievement for all three learners, and I’m very proud of them. This was the first quarterpeal rung by the current Broseley band. It was also great to be able to do our bit to help towards Zac’s treatment.

Anyone else who would like to donate towards Zac’s treatment, can pledge some money through Just Giving here