On 27 April, Harry Helyer rang the treble to a quarter peal of Cambridge Surprise Minor and so completed all the activities for his Level 5 in Learning the Ropes.

This was achieved 16 months after his first lesson and three weeks after his 11th birthday. He rather over-achieved, int hat he also rang a quarter peal of Grandsire Doubles in the same evening, thereby qualifying for Level 5 in both routes.It was a good day for Harry, since earlier in the day he had led a team to victory in the local branch striking competition (Called Changes section) where he put in the calls in an expert fashion. He is mad keen on anything to do with bells and his parents have had to adjust to the constant sound of bells in the house, as he practises whenever he gets the chance – on the piano or simulator.Harry has already ticked off a first peal and quarters of Plain Bob Royal and Grandsire Triples for his LtR Plus. 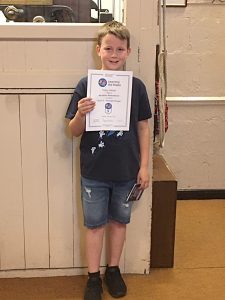 When asked what he likes about ringing, Harry simply replied:“Everything”! He just loves to ring bells and doesn’t mind whether it is Rounds to help somebody less experienced, or the challenge of the next new method.I also asked about his ambitions and he said he wants to get his own handbells and mini-ring and be Tower Captain at Northallerton. These may all be plans for the future, but his other ambition “to ring a quarter peal of Surprise Major” may not be so far off.

This article first appeared in the July 2019 edition of ‘Tower Talk’ – the free quarterly newsletter for new ringers, by new ringers. To download the whole edition, please click here