Pauline Fox is a learner at All Saints Church,Northallerton, North Yorkshire. She briefly rang as a teenager at her village church and began working towards her ART Learning the Ropesc ertificates in October 2017, when she moved from Northumberland back to North Yorkshire and re-engaged with bell ringing. Her teacher is Jennie Town 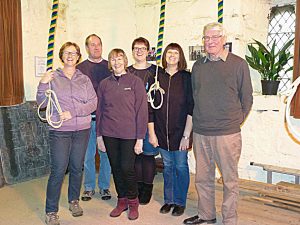 15 April 2018 Rang for Sunday evening service, Rounds & Called Changes on ten.Terrifying! If I don’t pull hard enough the bell doesn’t go up and then crashes down too early …

9 July 2018 Back at practice after a month away in France. I’ve missed loads, including a tower outing which was clearly lots of fun.

11 August 2018 Rang the Tenor to a quarter peal of Plain Bob Doubles.

27 August 2018 First attempt to ring the Treble to plain hunt. The first time it all seemed to work but then it was as difficult as I feared it would be!

4 September 2018 Rang for a wedding, lots of people away! Rounds and Called Changes on eight. The conductor was great at keeping us relaxed so we could ring to the best of our ability. I was really proud!

1 October 2018 Back at evening practice after three weeks away. Delighted to hear that two of my contemporaries have passed their ART LtR Level 3, but very jealous too as it will be a long time before I’m there.

11 November 2018 Armistice Day. Important, with lots of ringers in the tower and everybody concentrating hard. Very poignant to ring half muffled bells in the morning and then open bells in the evening

1 December 2018 Rang the Tenor to a quarter peal of Plain Bob Doubles at Whixley Church, to celebrate my parents’ 60th wedding anniversary. Found my name in the tower signing-in book, dated 28 June 1976 – no wonder I don’t remember it!

9 December 2018 Tower outing to Richmond and Bedale, to celebrate our Tower Captain’s 70th birthday. Got the chance to ring at both towers

24/25 December 2018 Rang for midnight mass and then for Christmas morning service, Rounds and Called Changes on ten. Great atmosphere.

26 January 2019 Rang the Treble to a quarter peal of Plain Bob Doubles.

This article was first produced in the April 2019 edition of Tower Talk magazine, the free quarterly e-magazine for New Ringers by new ringers. To subscribe for future editions, please sign up here