That’s what they say at the start of ringing, but I had no idea that church bell ringing was going to grab hold of me the way it has.

Just over a year ago, here’s how it started for me. A leaflet in the village shop explained that the “Ringing Remembers” campaign wanted to recruit 1400 new bell ringers to remember those ringers who lost their lives in the First World War. I called the number on the leaflet and Nicky offered me a chance to have lessons at our local church, St Lawrence in Canon Pyon. 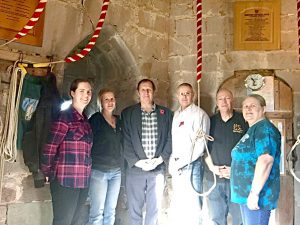 “Why don’t you come along to Hereford Cathedral on Sunday morning and see what we get up to first” she said. Great idea!, I thought, so I climbed the 138 steps to the ringing chamber and was taken up to the belfry to see the bells before watching the band ring the 10 bells for service. Already I was starting to think about the men and women who had stood in that very chamber for hundreds of years ringing the bells, and those that “Ringing Remembers” would commemorate.My first lesson was great fun, and at the end they all said; “Come along to the pub now, it’s pie and pint night.” Now it was getting interesting; there’s a social side to it as well, I’m getting to like this, I thought. After a few more lessons and some steady progress there was mention that the bells should be rung for the coming Easter service. When I doubted that I could be anywhere near ready for that, Nicky said; “You’ll be fine but if you want more practice come along to St Peter’s at Lyde on Monday evenings.” Easter came along and we rang Rounds and Called Changes for service. It felt like the first milestone, actually being able to ring for real. By this time, I had also been invited along to a monthly practice evening at Hereford Cathedral. I had no idea when I first visited the ringing chamber that I would get the chance to ring on those historic bells so early on in my training. The sixth at Hereford Cathedral was cast around 1350 and yes, I had the chance to ring it. It’s hard to describe the feeling I had at being allowed to ring such an historic bell.

More steady progress came; visits to practice nights at a few other towers and a fabulous district outing to Wales where we rang at seven different towers in a day with, of course, pub lunch in the middle. I was starting to see how addictive this bell ringing lark could be! The Hereford district striking competition came along in July, hosted by our band at Canon Pyon and we entered the Rounds and Called Changes competition. There was a barbecue, cold drinks and the most informal district summer meeting imaginable as eight bands enjoyed friendly competition with no one really caring who came first or last. But we didn’t come last! One band were just as interested in relaxing in a hammock in the early summer sunshine!

Confidence was starting to grow, but the mention of quarter peals in conversation in the pub after the striking competition suddenly made it all seem very scary. “We should ring a quarter peal” said Nicky. There was I wondering if there was any chance I could learn enough to be able to ring a quarter by Armistice Day. This was July and it didn’t seem like there was much time to practice and improve. “No, not for Armistice, it’s district quarter peal festival, what are you doing next Wednesday?”Nicky asked. I was absolutely terrified at the thought but, Nicky was again saying, “You’ll be fine.” If I had a pound for every time I’ve heard that over the last year! Anyway, after ten minutes on her phone Nicky had gathered a band to ring “Len’s first quarter” followed by dinner in the pub. Now there was no way out. Not time in fact to be terrified! I’d been chucked right in at the deep end. 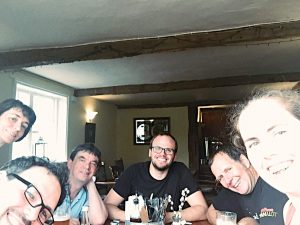 We got the quarter and it was a great honour to ring the tenor behind with five of the best ringers in the district.Nicky seems to enjoy chucking me in at the deep end. It seems to work too. Before I had a chance to think about it, I was attempting Plain Hunt. The great thing about bell ringers is they will all help and support you through the first few dreadful attempts at ringing any method provided you show enthusiasm and a willingness to learn. Armistice Day came and again I was told everything would be fine, I would be picked up and taken to where I was to be ringing. I had no idea what was in store for me.

We started at Hereford Cathedral then our local church in Canon Pyon. Back at the Cathedral,we removed the muffles and a quarter peal was rung at midday. I didn’t ring in the quarter but was able to watch a very good band score a quarter of Grandsire. We rang at four more churches, including Moreton on Lugg which was an incredible experience as the ropes fall only 8 inches from the wall of the ringing chamber and you have to stand sideways, one behind the other, except for the third which falls in the middle of the room!

After a pub break, we finished off at Canon Pyon where we removed the muffles and rang a quarter peal for “Battle’s Over” at 7pm. An incredible day’s ringing and the very reason I had started just over eight months before.Now, just over a year into ringing, I’ve had the opportunity to ring five quarter peals – three on the tenor behind and two on the treble – and at three different towers. I have had the privilege to ring for service at Hereford Cathedral; and I rang in the new year at Burghill where there were so many ringers that six of the eight bells were shared by two ringers, one on handstroke, one on backstroke – that was great fun!

I’ve rung at about 25 towers, mostly in and around Herefordshire (it’s far too soon to have lost count!) and made many friends; Jason who patiently stood as I first rang backstroke holding the tail end like a golf club; Nicky who tells me it will be fine and pushes me along when I dare to doubt that I’m ready for my next step; Kris, Fran, Andrew, Ashley – we share the same birthday, Dan, Rick, Liz, Briannie, Martin, Anne, so very many more, all of whom will help if they can. I can’t ever imagine life without bell ringing now; it has definitely grabbed hold of me!

This article first appeared in the April 2019 edition of Tower Talk – ART’s free quarterly e-newsletter for new ringers, by new ringers. To receive future copies, why not subscribe here?