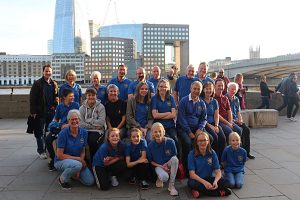 The band is thriving with a good mix of young and old, and teaching and learning are very much on the agenda, as well as having lots of fun. In September they enjoyed a great day out in London, described by 13 year old Emily:

On a glorious sunny morning, 24 ringers from Shenfield St Mary‘s travelled up to the City of London to visit four of London’s finest bell towers. Our first stop was St Dunstan-in-the-West in Fleet Street, with ten bells. St Dunstan was a former Bishop of London and Archbishop of Canterbury and is the Patron Saint of bell ringers. The church dates from 1000AD, although the present building, with an octagonal nave, was constructed in the 1830s by John Shaw. Then on to St Vedast, which has a heavy ring of six bells – the tenor weighs 16cwt. The church was established in 1170 and was rebuilt by Sir Christopher Wren after the Great Fire of London. It was completely burnt out during the Blitz and was restored under the direction of its Rector, Canon Mortlock

After lunch, it was only a short walk to St James’, Garlickhythe, nicknamed ‘Wren’s Lantern’ due to its many windows. Garlickhythe refers to the nearby landing place or ‘hythe’ where garlic was sold in medieval times. St James’ was first built in the 12thcentury but was also destroyed in the great fire of London in 1666 and rebuilt by Sir Christopher Wren.St James’ is the home of the Royal Jubilee Bells, which were sailed down the Thames for the Queen’s Diamond Jubilee. The eight bells were cast by the Whitechapel Bell foundry. The tenor weighs 9cwt and is called Elizabeth. The other bells are Philip, Charles, Anne,Andrew, Edward, William and Henry. We were allowed to climb up into the bell tower to see the bells as they were being rung – wearing ear defenders of course.This was the highlight of the day for me. The bells were loud, but it was fantastic to see them in action. 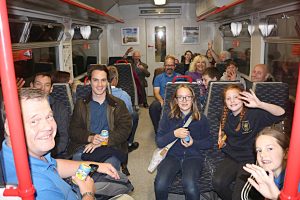 Finally, we set off to St Magnus the Martyr, London Bridge. Prior to the Great Fire, the old tower had a ring of five bells, a small saint’s bell, and a clockbell. Wren rebuilt the church in 1671. The ten bells were removed for safe keeping in 1940 and stored in the churchyard. After the war, four bells were found to be cracked and the bells were finally sold for scrap in 1976. The current bells were cast in 2008/9, and are named Michael, Margaret, Thomas of Canterbury, Mary, Cedd, Edward the Confessor,Dunstan, John the Baptist, Erkenwald, Paul, Mellitus and Magnus. Everyone had a wonderful day. Thank you to Ian Stockwell for organising access to such wonderful churches. On the train home we were in such good spirits that we sang happy birthday to Emily who had turned 13 and had decided to spend her birthday with us, bell ringing and having fun.

Back home, there was more success to celebrate as two teachers received their Module 1 Teaching Certificates, two young ringers were awarded their LtR Level 2 certificates and three more their Level 1. In October half term, teachers Beth and Mark organised a special afternoon just for the young ringers. Sarah, one of the young ringers, explains: 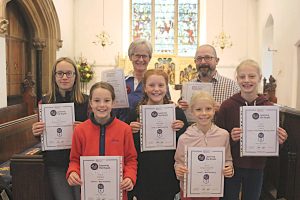 In October half term, the junior ringers of St Mary’s band had a very fun party including a very stranged ance called the place making dance.First off, we all had a ring up and, because there were so many girls, we decided to make a girl band. In the girl band, we did some Rounds into Called Changes and back into Rounds. After this we went down for some pizza, which was yummy, and delicious cupcakes made by Kathy. Emily and her mum had made a quiz (about ringing) for all of us to do. Amelia won it and received an Amazon gift voucher. Before going home, the young ringers band, including me and Kathy (who is also a ringer), did a strange dance representing the places in Plain Hunt. It was very hard at first, but after some practice we all got there! So lots going on and the good news is that Shenfield share their success by teaming up with other local towers, Ingrave, Hutton and Brentwood, for teaching and learning practices. The “Plain Hunt Quadrille” can been seen at here