What an experience to see the place where many of our bells were originally cast! I’m not going into the detail of the foundry’s history, or the technicalities of how a bell is made. That’s all searchable, and Wikipedia has lots of what you need to know with plenty of links to in-depth information. The atmosphere of the place, which essentially hasn’t changed since it was, erm, founded, in 1839, is so evocative of the bygone age of ‘doing stuff properly’. 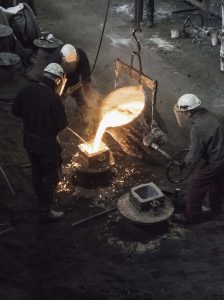 It’s also heartening to know that the way they made bells hundreds of years ago is pretty much exactly how they still do it today.

We arrived early and were sixth in the queue and secured the valuable ticket for the 12 noon casting. I’m not sure what percentage of the visitors were bell ringers but I don’t think it was particularly high. I recognised one other ringer and heard two or three others speaking ‘Bellish’. However, non-ringers,including my husband, were equally enthusiastic and astounded by everything they saw!I had to keep close to our guide so I could hear what he was telling us! Noise and sounds were all around at various times, such as a demonstration of a large bell in a frame being – almost – rung up, and the noise of the furnace, and the sound of a machine turning another large bell which was in the long process of being tuned by the Master Tuner.

It was an assault on the senses! We saw complete sets of bells from all over the world in various stages of refurbishment or completion –including a couple of large ornate bells awaiting transport to Sri Lanka. The recent installations in France,at Vernet-les-Bains, and in St Andrew’s Cathedral in Singapore (about which we’ve all recently read with great interest) were carried out by Taylor’s. And sadly,the fire-damaged bells from Royston, Hertfordshire, were a sorry sight awaiting repair. At 12 noon we were guided up to a viewing platform over the casting shed (a vast area!) so that we could observe a casting. I had no idea how big a bell this was to be as they bury the mould in the ground and only a couple of feet or so protrudes. (In Ye Olden Days, bell founders were ‘mobile’ and would go to the village or town where the bells were required and set up bell pits in a nearby field, hence the names of many fields and local areas around churches such as Bell Field, Bell Lane, etc.) The smell and noise during the process was immense. The metal was red hot; there was a fierce glow and flames and sparks everywhere – the word inferno sums it up! The three people working on the casting went about things in a calm and efficient manner. First they tilted the heating vessel and the molten metal was poured into a second vessel. This was attached to a ceiling-mounted gantry which they could control and they guided it over to the bell mould in the ground. Some powdery stuff was thrown into the mix before this which I have subsequently found out was tin. This is to do with the proportion of tin in the bell metal altering during the cooling process. They also stirred it with a branch which emerged charred and on fire. Again, I’ve since learnt that this is a willow branch and the salicylates in the bark do something magical to the flux. They positioned the vessel correctly and poured the metal into the mould, stopping now and again to put a big stick down into the mould and stir and prod.We were all left with a sense of having witnessed an ancient manufacturing process which has no truck with modern technology. (Although I’m sure progress has helped the foundry in some ways!)

The foundry roof has been recently replaced, preventing the rain from simply pouring into all areas below.The Loughborough Bellfoundry (yes all one word) Trust has recently been set up to hold the John Taylor Bellfoundry site in perpetuity, and are currently fund-raising and hoping for funds from the National Lottery.We are very lucky to have this foundry still in good working order and now in a healthy business position for the foreseeable future. Long may it continue. Do look up Taylor’s, and all aspects of bellfounding – and I would certainly recommend a visit if and when you can.Plus – it’s number 32 in your ‘50 Ringing Things’ book!