Take a lot of Tysoe, namely David Bell and David Rake as my mentors, an idealistic and ideal band in Lighthorne and one crazy 63 year-old-American hand surgeon, bent on at least trying to learn the ropes, handstroking and backstroking his way between Braunschweig via Hanover to London-Heathrow and Tysoe six times a year and two years of that sort of craziness.

And then, presto, a quarter peal in Lighthorne on Saturday, 9 November, 2019! Plain Bob Doubles. And I still don‘t know what it means and how it happened. Except that it was fun. All 43 minutes of covering. The first 8-10 minutes, I did what I think I was told to do.“Don‘t even try to understand or memorize the method, just listen! You always strike last: one-two-three-four-five-SIX!“ Those minutes went well, as I just counted and tried to strike my bell properly. Looking straight ahead, not even trying to watch the sallies as they slithered their ways up and down aro 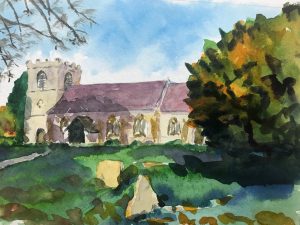 und me. It was almost blissful. Relaxing and soothing, at least for me.

What had I been so anxious about? This was fun, I even felt myself smiling and laughing, venting my pent up uneasiness. Like a small child, secretly wearing the much too large clothes and shoes of a parent, admiring itself in front of a full-length mirror. Then, something happened. Even I noticed it. Something had gone wrong. But what and how? I, at the other end of my bell, was out of touch, out of step, out of line and completely out of synch. Clipping and gapping. Even to my ears, it sounded nearly awful. How would the others, the five experienced bellringers, my handlers be able to help me out of this mess? How would they be able to save the quarter peal attempt? Could they, would they?

They did. Graham Nabb, the conductor, caught my attention, prompted me and encouraged me in a number of his own special ways. A raised eyebrow here and there, a nod of the head in one direction or another, a discreet hint, an overt gesture. As indicated. Through his cajoling, through his experience and help, the one lost sheep had been brought back to its flock. I finally seemed to have found my place again. Of course, sixth and last, but that was fine with me, it was where I belonged! And then, just when everything seems to have felt just right, Graham called out “This is all!“ and we went into rounds and then rang the bells down in peal. It was over, done, my first quarter peal! I think my pallbearers were just as relieved as I was. And, now, there is even talk about another quarter peal the next time I come to Tysoe in January. Who knows? Today, I can only say thank you. Thank you to David Bell,“Captain, my Captain“ and David Rake, my tenacious and infinitely patient instructors in Tysoe since January 2018 for taking me under your wings for so long and so often, helping me along a soul-searching journey that often seems daring and impossible in equal measures. Thank you to Mike Rigby, Tower Captain at Lighthorne, ever friendly, ever helpful, ever gracious. 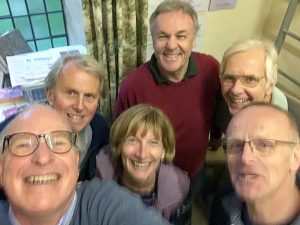 Thank you Graham Nabb, instructor wizard of Kineton and Edgehill and beyond, a formidable ringer and knower. And thank you John and Lucy Gwynne for your selflessly kind help and support, not only that Saturday in Lighthorne, but long before that, whenever our paths crossed.

This article by Niels Benatar of Braunschwieg (Germany) first appeared in the January 2020 Edition of Tower Talk magazine, the free quarterly e-magazine from ART, for new ringers.

To subscribe to future editions via email, please fill out your details here

One thought on “My First Quarter Peal – The Result of a True Team Effort!”