Back in the year 2000, many people took up bell ringing as part of a national campaign to get bells around the country ringing for the Millennium. One of these new recruits was Sarah Hughes of Layer de la Haye in Essex, a tower whose bells were restored in 2000, after many years of silence since the tower was struck by lightning in 1884.

Sarah had to stop soon after while she gave birth to her son Jamie, but the good news is that she’s back in the tower, and she’s brought Jamie with her. Recently Jamie was presented with his Learning the Ropes Level 1 certificate and both he and his mum are learning together. Some peop 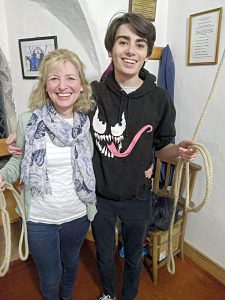 le start their ringing careers early, but surely Jamie had a head start on everyone else?

This article first appeared in the January 2020 edition of Tower Talk, ART’s free quarterly e-magazine for new ringers. To make sure you receive future editions, sign up here: