Back in March I decided to set up a group to support new or fairly new ringers from several local towers who need more rope time or access to training exercises than they currently receive from their home towers.Regular evening practices cater for ringers of varying abilities, so additional targeted training and practice sessions to work on specific skills can be invaluable. Our first session covered basic bell handling and exercises to support the stages from bell control through to thinking about Plain Hunt. But there is never enough rope time to refine these skills in one session; so I organised another as a follow-on. I selected a tower that most of the participants had not been to before, with a longer draught than they are accustomed to. 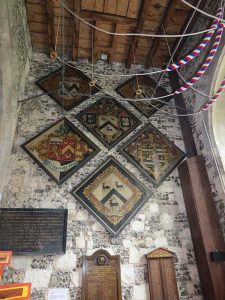 Caspar Kennedy writes about his experience of the day: Following a practice at All Saints, Harrow Weald, a group of six ringers needing to practise their Foundation Skills visited St Martin’s, Ruislip, a beautiful church and a former abbey, dating back around a thousand years. Sonia Field led the practice with several helpers.There were no steps to climb as the ringing chamber is on the ground floor, located at the right hand corner next to the main entrance of the church.Ringers come in with the congregation and can both see and be seen through the dividing glass screen.There were eight bells and we used six. The afternoon went well. We started out with some ringing in rounds on some very springy ropes with quite a long draught – a new and strange experience at first, but the springiness meant the bells set themselves when you got used to it and encouraged some very straight up and down ringing – what we sometimes call ‘drainpipe ringing’!There was a wire frame suspended from the ceiling to guide the ropes between the floor and the ceiling so the draught was only about two-thirds as long as it appeared. The rope guides are there to help keep the rope straight as it travels down from the bells high above.The ringers and ropes were well spaced in a circle. After a short while everyone got used to the elastic ropes so when the call came to ‘stand’, the bells were silent with no solo performances.I found a use beyond mere vanity of seeing my reflection in the glass in that I could see my hands coming to the rope ready for the rise of the backstroke. This meant I was able to correct a handling error that I have been told about but could now see for myself.We covered bell handling and control, speed changes, position changes, call changes, dodging and plain hunt exercises. We had a go at some Kaleidoscope exercises and Cornish (a kind of Plain Hunt from Simon Head, one of our helpers). It was an enjoyable session from which I think we all learnt a lot.There was plenty of positive feedback from the afternoon which I was happy about. And to round off the day some of us enjoyed a meal together at a local establishment, as it is important to focus on the social side of ringing too!

This article appeared in the July 2019 edition of Tower Talk, the free quarterly e-magazine for new ringers, by new ringers. The full edition can be downloaded here and you can subscribe for future editions by email here