In Tower Talk number 10, Brian Giles described how a new band got off the ground at Weekley, Northants. Here he gives us an update – not without its dramas! Having found Elaine Greatrex, our ART teacher, four new ringers at Weekley were making progress with their ringing. However, eventually the inevitable happened: we broke our first stay. It seemed like a simple problem to solve since I had managed to get hold of ten lengths of American Ash in anticipation of just such an event. Nick Churchman, Peterborough Diocesan Guild Steward and DAC Bells Adviser, came to our rescue to show me how a stay is replaced.

Once in the belfry, he found that the frame to number 5 bell had broken. This was a new break, as the frame had recently been inspected when the bell bearings were being oiled and ropes adjusted. It appeared that rust had forced the frame up, causing stress and ultimately the break. Sadly, we had to stop ringing while further investigations were carried out.

Ringers without a tower

With four enthusiastic novices champing at the bit to ring for the Easter services, we needed somewhere to continue our training. Fortunately, Helen Churchman, Kettering Branch Ringing Master, who has been teaching us, invited us to Rothwell church. Wow! They are such lovely bells! Progress was rapid and we were joining in with Rounds of up to six bells. A very grateful band of four.

Meanwhile, the inspection of the damage confirmed that 20 years without maintenance and the consequential rust had caused the problem. So, from a raw novice, I suddenly became Tower Captain and had to delve into the intricacies of frame mountings and bell safety.We were advised that numbers 5 and 6 bells were not to be rung but the other four could be if the rust was removed from the RSJ and treatment applied. In the meantime, a quote for the necessary repairs would be forthcoming. 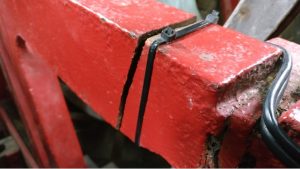 The quote arrived – for over £14,000. I started to realise how much work will be involved in seeking grant aid, but it’s nice to know that there are institutions that want our church bells to be kept ringing for future generations. And, being retired, it fell to me to arrange for the rust removal and treatment to be done.With hammer drill, chisels and protective clothing I spent two days clearing the rust from under the frame feet and chipping off flaking rust from the RSJ. It was dirty but satisfying work, especially when we were given the OK to continue ringing four bells. Back home we realised our bells were not the easiest to ring and, comparing them with Rothwell’s, we really understood this!

So, what have I learnt?

First, that towers that have not been rung or maintained for many years are going to need a great deal of TLC.Secondly, that there are lots of very helpful ringers who are willing to come to your aid when things go wrong. We cannot thank them all enough.Thirdly, that learning to ring is definitely not confined to turning up on practice night and pulling on ropes.Whether Tower Captain or one of the team, there are jobs to be done, money to be raised and support to be given.And finally, that ringing is an addictive pastime that is interesting and enjoyable with new challenges coming up after each step you take towards being a competent ringer