In the previous edition of Tower Talk, I described my long-distance relationship with English bell ringing from my home in Braunschweig, Germany. I have now developed an affinity for the Tysoes and the Cotswolds which makes me feel giddy. It’s not just the addictive (six times this year alone!) elopement-like jaunts from Thursday to Saturday, jetting me out of Hanover to London and back, the breath-taking drives “on the wrong side of the road” from Heathrow’s Terminal 5 through the English countryside to Tysoe, but the bell ringing itself. The many talks and practices under the caring and hospitable wings of both my teachers, David Rake and David Bell, and a growing circle of bell ringing acquaintances: “Oh, so you are Niels!”The culmination of this year’s Exercises was the extended weekend from 8 to 11 November. An experience of utmost intensity, moving and touching in many ways. On Thursday, 8 November, I took the first flight out of Hanover, arriving in Heathrow shortly before 8am.This time I made a “short detour” to Taylor Bells in Loughborough, where I was given a personal tour of the foundry. The last bell foundry in the United Kingdom and I was there! A place worth visiting, an in stitution worth supporting, not only by bell ringers. Later on that afternoon, there was a bell ringing practice in Tysoe and an evening session in Lighthorne,where I was able to try my luck at ringing Rounds and try the patience of the others in Called Changes. The bells were already half-muffled, in preparation for the upcoming solemnities. 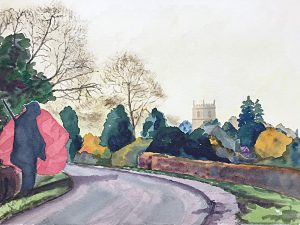 Watercolour of Tysoe by Niels. Church in the background and one of the black metal silhouettes of a WW1 soldier standing guard in the foreground

The next morning there was more practice in Tysoe and then, on Saturday, the presentation of a new peal board dedicated to the Women’s Institute in Tysoe, followed by another practice session leading up to “Ringing Remembers Routes across the Guild, 10 November 2018”. It was nothing less than a superbly conceived, well organized and minutely orchestrated “Steeplechase”by the Coventry Guild. Four Routes were plotted and with my teacher,David Rake, we chased down part of Route 1, so off we jaunted on our own little steeplechase, taking us to Halford, then to Oxhill, and then “back home” to Tysoe, where my other teacher, David Bell, was waiting with others interested and intrepid enough to not only scale the staircase up to the ringing chamber, but past the clock chamber and the bell chamber and even onto the roof of the bell tower itself, gaining access to the old crenelated tower, the flagpole hissing the Union Jack, and giving way to a view of England’s finest countryside, flanking the Cotswolds. 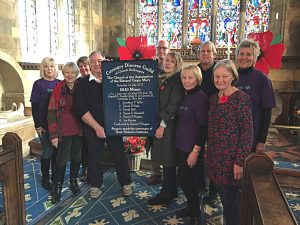 The presentation of the peal board

The next morning, sunshine. Sunday, 11 November 2018, was the day all had prepared for! I had my “Ringing Remembers” badge and my poppy-appeal wristband and waited a few steps behind to witness and participate in what unfolded that morning and early afternoon. All of you reading Tower Talk were present, each in your own way. You have your memories, your thoughts and your emotions, none of which I would want to water down or alter in any way.

For me, being part of “Ringing Remembers” was extremely moving. Not only the small pamphlet “Silence …we will remember them”, so well worded, so touchingly illustrated, and so full of solemnity, grief, thankfulness and hope. The Kohimah Epitaph “When you go home, tell them of us and say, for your tomorrow, we gave our today.”The morning began in Tysoe at 10am with half-muffled ringing, followed by a service held at the War Memorial,where numerous wreaths were carefully set down, before we silently gathered together to form a procession leading us back to “The Assumption of the Blessed Virgin Mary”, where David Bell had remained to toll the half-muffled tenor at exactly 11am. We entered the church-yard in silence and in respect, overcome. At the eleventh hour on the eleventh day of the eleventh month.As an American, born and raised in Los Angeles, I was only seven years old when President Kennedy was assassinated on 22 November 1963. But I still remember very clearly the mournful music played, while his casket was escorted down the Mall in Washington, DC. 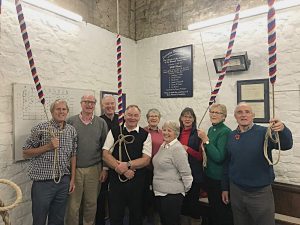 Tysoe’s ‘Ringing Remembers’ Band: Niels is second left, with David Rake (L) and David Bell (R) in front of him.

It was the hymn “Eternal Father”.One of several hymns, so aptly chosen for the church service on Remembrance Sunday, 11 November2018 in Middle Tysoe. A hymn which I had not heard since 1963, a hymn that in Tysoe touched me in many waves and ways. Then, after the church service, beginning at 12:30pm (as everywhere else in Great Britain), Tysoe’s bells rang forth in celebration,as they were meant to. And I was allowed to be part of this. Ringing Remembers. Thank you, my teachers David and David, and all of you!

To receive future copies of Tower Talk, the free quarterly e-newsletter from the Association of Ringing Teachers, please subscribe here.