I have rung a few quarter peals. That’s not false modesty because I do mean a few. Five to be precise. All the slips in these were lapses of concentration, getting distracted, drifting off, call it what you will. If none of us ever lost the thread like that there would be a lot more successful quarters.I have thought a lot about the factors that affect our concentration and ringing performance more generally.In the course of this I spoke to some very experienced ringers, one of whom conducts peals of spliced Maximus. That’s a different world from ours but maybe the same factors are at work.

Uncertainty with handling and ropesight

We only have a finite amount of brainpower to expend on ringing. If we are fighting with the rope, or flustered because we don’t know which bell to follow, we limit our ability to concentrate on the job in hand. All novice method ringers have looked at the circle of work for Plain Bob Doubles, memorised it, had a go and been completely unable to recall what work comes next. Frustrating but perfectly normal. So confident bell control and where appropriate, ropesight, is essential for full concentration.

You must be relaxed

It’s common for your ropesight to suddenly desert you. It suggests that you are nervous and on edge. When your mind and body are in the classic ‘fight or flight’ mode, your vision tries to home in on a perceived threat. If you are about to be gobbled up by a sabre tooth tiger you no longer see anything except the tiger. Peripheral vision is crucial for ropesight and that’s the first thing that disappears when you get stressed

I can’t hold a conversation if there is a television on in the room. My son can watch TV, listen to something else with his ear-buds and hold an intelligent conversation all at the same time. Maybe I could too when I was his age but I sure as hell can’t now. And of course one thing you can guarantee when ringing is lots of potential visual distraction,in the form of ropes and people. Those who can ring methods by ear and rhythm, just using ropesight as a backup if there is a slip or hesitation somewhere, have a big advantage in my opinion as there is less information for the brain to process and so it’s easier to concentrate. You can start to do this with Rounds and Called Changes, by just using your peripheral vision and practise making the changes without moving your head. Ultimately it’s much less work and you will ring more accurately to boot,particularly when others are having a bit of an epic. A simulator is brilliant for working on this.

Recently when ringing Called Changes, I increased the frequency of the calls until they were coming thick and fast. Everyone enjoyed it and two people said something that surprised me, which was that it was easier having rapid calls! Where there are long breaks between calls, you tend to drift off and think about other things so the next call catches you out. Shouldn’t happen? Maybe not, but it does. I like ringing Grandsire Doubles precisely because there is always something going on and you don’t have time to drift off. At the elite level, more than one person has said to me that they prefer ringing complex things [provided of course that they have done their homework thoroughly] because they tend not to go into autopilot. 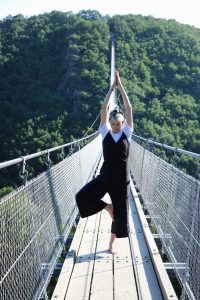 Two very experienced peal ringers told me separately that they often fix on something they can look at while ringing, such as a crack in the wall or some other insignificant thing. If they feel their concentration starting to slip they come back to fix their gaze on that object. Of course this presupposes the ability to ring without constantly looking around, but I feel that is something we should aspire to anyway. That brings me to my final point, which is to consider whether we can train ourselves to concentrate better. I think the answer to that is a definite ‘Yes’, though it isn’t a quick fix. The technique usually known as mindfulness involves remaining ‘in the moment’ all or as much as possible of the time. In other words stopping yourself from thinking about what’s for supper or the cross words you had with your other half earlier in the day.And that’s precisely what we need to be able to do to focus on ringing for significant periods of time. The starting point for mindfulness and all meditation techniques is to train yourself to concentrate on something, sometimes a candle or some other physical object, but more commonly your breath. Every time your attention wanders, which will be constantly, you gently bring it back to your breath. As I say, this isn’t a quick fix and learning to meditate well is likely to take years, decades even. But nevertheless it makes a difference right from the start, and whether they knew it or not I think the ringers who said they like to have something to focus their gaze on were using a basic meditation technique. And if you’re wondering, yes, I do meditate, though not very well. Work in progress …

This article first appeared in the October edition of Tower Talk. To subscribe to future editions via email, please sign up here